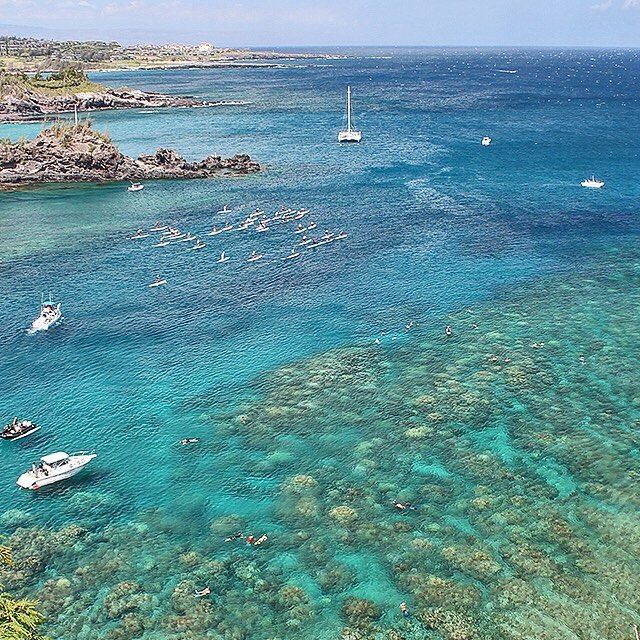 Two consecutive weekends, two consecutive crossings of the Pailolo Channel and 54 miles of racing from the islands of Maui to Molokai.

Self supported, aiming for the an outline in the distance these races are as much an exercise in skill and navigation as they are athletic prowess.

For those that are not from these shores, these channel crossings requiring a mix of navigation, surfing skills and fitness are where the real challenge lies.

As we formed the start line between the official boat and a buoy anchored in the water in the sheltered emerald waters of Honolua Bay on Maui’s western shores we could see the wind line forming in front of us.

Having been across this channel last weekend and had one of the best downwind runs in memory I was excited for another chance to surf my way from one island to another.

With two events crossing two weekends, many had opted to do the latter of the two. Those that had raced the previous weekend were the lucky ones, treated to an epic crossing and an equally epic welcoming party and hospitality on the other side.

With a big field and the Aussie invasion of Maui in full effect, the pace was on from the gun. It’s also where the fields split in these events – typically right from the gun as some choose to take a high line, others choosing to go more south to get into the bump sooner. One way or another, all roads lead to Rome and it’s crazy how after not seeing anyone for miles you all converge on the same place to finish.

If last weekend was a hero run, this week you had to work for it. The wind had a lot of north in it, the tidal variation was small and going against us which meant the water was really sticky.

The first 10 miles were great and then the hard stuff started. It was hot, it was sticky and the water was in a confused state. As the miles clicked over and we wrapped around the eastern side of Molokai the wind lined up, the swells stacked up and the bump started to run again. It was good but each time my watch beeped to say another mile had passed it was definitely running slower than the previous week.

Without doubt the hardest part of these races is the navigation. Picking your line and trying to pick the fastest line is the make or break when all other things are equal. Should you go a little further south, should you stay inside? It’s a hard question to answer when you have no idea if there are other people around as the swells are higher than a lot of houses so seeing a glimpse of anyone is nigh on impossible at times.

As the long rectangular roof of the wharf building at Kaunakakai Harbour came into view I hotted up my line to skip over the reef to the finish off the end of the pier. In so many sports you know if you won or not, but races like this, if you’ve been separated from your competition you really have no idea. If you can’t see anyone or haven’t seen anyone – you’re either a hero or a total flunk. As I crossed the line I was pleasantly surprised to be advised that my efforts had been enough to win, although I was fast debriefing on what I needed to do differently if I were to do it over again. As always it was less about the result and more about the outcomes to learn and gain from.

It’s not a lie that these events are somewhat of a logistical nightmare. Starting and finishing on different islands brings it’s own unique set of challenges. You need to have a boat ride back to the start for both you and your board, you’ll get dropped at the wharf which is about 20minutes from where you started, so you needed have thought through how you’re going to shuttle cars. Anything you want at the finish (which needs to be minimal) needs to be on a dry bag and paddled out to a boat before the start.

In many ways, this jigsaw puzzle of logistics and organisation is half the fun and twice the appeal. If it were easy everyone would do it right?

So there we have it. Two weekends, two crossings of the Pailolo Channel, two wins, but two very different races.

And if you’re wondering why there’s been two races from Maui to Molokai in two weeks, I’ll give you the short hand version. The organisers of the two events used to work together to produce one event. There was a falling out and one event is now run by Molokai and one event is now run from the Maui side. Regardless of who’s running what, the athletes and paddlers are the winners. The Pailolo Channel is possibly the best downwind channel crossing in the world period. And now there’s two races in two consecutive weekends. I’d say that’s a winner straight out of the gate.

You can read about this year’s Maui2Molokai event in the Maui News here and on SupRacer.com here

Low chat.... max action ~ just do.
And just like that, the 'dog days' of summer finally arrive.
Nature: quietly giving us cues that it's OK to stand out in a crowd.
The fresh bounce of new kicks never gets old 🏃‍♀️
How to confuse the algorithms 101
Just over here casually hanging out waiting for summer to fully kick in.
Loading Comments...
%d bloggers like this: